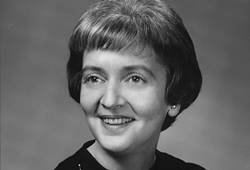 Pat Rudolph, or "Mother Cardiff" as she was known, was an extraordinary woman, community activist, and leader. She dedicated herself to her community and loved it as if it were her child, and she was passionate about helping those in need and fighting injustice and intolerance. Although she passed away in 2000, her legacy is giving birth to opportunity and academic excellence at MiraCosta College today.

Following high school Rudolph traveled the world as a stewardess, and then later as a Special Events Director, for United Airlines. After a lifetime of working around the world, she found a "home" in Cardiff-by-the-Sea.

Among many of her contributions to her community, she adopted the nearby MiraCosta College's San Elijo campus as it was being established. She served on the college's advisory board for many years and it was during that time that she developed her devotion to hard-working responsible students who could benefit from what she called a "hand-up" not a handout.

Rudolph decided to make provisions in her estate plans for MiraCosta College. She knew that by doing so she was creating a legacy that expressed her strong belief in the power of education to both transform the lives of individuals and strengthen her community. Today, the Patricia and Mark Rudolph Scholarship Endowment funds scholarships for nearly 25 deserving students each year.

Have you thought about the legacy you would like to leave? Setting up a bequest is a great opportunity to ensure that your values endure. To learn more contact Elaine Dodge at 760.795.6652 or visit our website miracosta.giftlegacy.com to access free tools for planning your will.